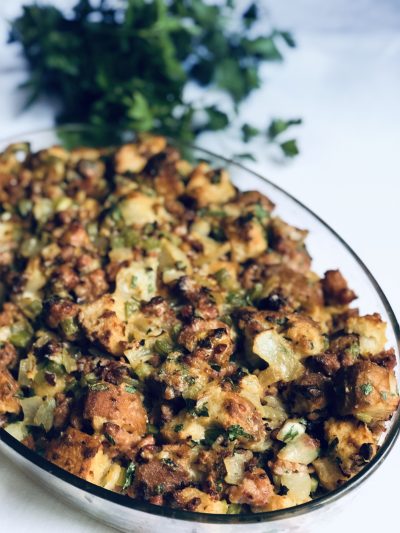 Americans wait an entire year for Thanksgiving to come around just so they can sink their teeth into stuffing. For us stuffing is as comforting as Cheerios or Apple Pie but it is also like lost treasure, a sacred dish reserved only for the 4th Thursday in November. 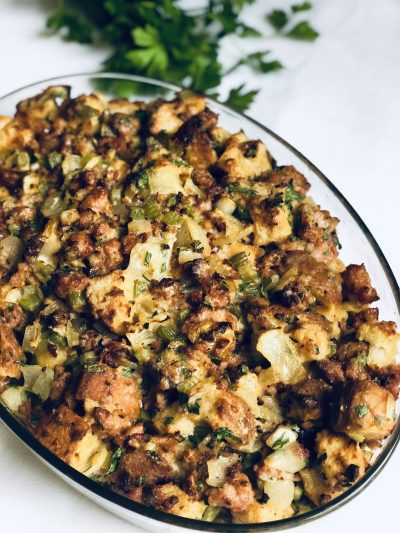 Living in Europe I know that Americans don’t have the best reputation internationally when it comes to food. How little do they know…….how good our food can be! Ok, so there are people who consider jello salad or sweet potatoes with marshmallow crust to be part of a Thanksgiving meal. To each their own. But the US has fantastic food and amazing food traditions. One thing that always surprises me when discussing Thanksgiving or Christmas with non-Americans is that they want to know what specific dishes we prepare for each holiday. In Europe, countries are smaller and traditions are deeper. Specific dishes are carved into holidays on a national level.  In England families eat turkey on Christmas Day, followed by Christmas Pudding and Minced Pies. A French Christmas is not complete without a Buche de Noel and the Swedish have very strict guidelines about what should be included in a smorgasbord.  I explain to my European friends that in the US the meals we eat at Christmas, and even Thanksgiving, depend not only on the region where you live but also your family history. If you are a family with Irish roots living in Louisiana your Thanksgiving meal will be different to an Italian family living in San Francisco which will be different to a Mayflower family living in Connecticut. We are a huge melting pot and our food reflects that. We do have one national holiday – Thanksgiving – which revolves strictly around food but even then the meals on our table are as varied as are our political opinions. One thing that does unite us in our Thanksgiving feasts is the presence of two dishes – turkey and stuffing. How we prepare them is influenced by region and family tradition.

As a child my favorite part of Thanksgiving was the stuffing. My family prepared it in New England fashion by adding apples and raisins which suited my sweet tooth just perfectly. In my twenties I had my first Southern stuffing (or dressing, as it is called in the South) made with cornbread and I thought I had died and gone to Heaven. It wasn’t Heaven, it was just Alabama. Same country, same holiday, same dish…. two very different ways.

I grew up with an Italian grandmother who was your quintessential turn of the century immigrant. She did not speak English and she lived in an Italian part of New York that allowed her such a luxury. Most of my memories of her involve food, but not Thanksgiving. Thanksgiving was not her holiday, not her meal. It was the one time of year when she would put her feet up and travel north to Vermont to let her American grandchildren wait on her with their roast turkeys and pumpkin pies.

As an adult I’ve played around with my Thanksgiving repertoire and decided to leave the apples and raisins in Vermont. My stuffing reflects more my Italian roots, maybe to honor Grandma, or maybe just because I love sausage and cheese. Either way, it’s a good one. It’s stuffing like I remember it, just more indulgent and rich. One of my best friends here in Europe is Australian and last year she told her French boyfriend to  “Try that – it’s amazing. I have no idea what it is – some cheesy, bready thing – but it’s the best part of Thanksgiving.” 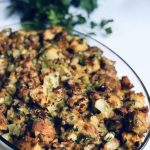 This stuffing is rich and indulgent. You can prepare it up to 4 hours before baking. I often drizzle a little bit of the turkey juices over the top before placing in the oven.

About the Author: Jessica Verity

You have Successfully Subscribed!