I had the pleasure of living and working in Mexico for 2 years when I was in my twenties. We worked on a yacht that traveled from the east coast of Mexico, through the Panama Canal, up the west coast and eventually spent a year in the Baja Peninsula. All in all it was 2 years in Mexico and Central America. I learned a lot about Mexican food in those years. I was young and American so before traveling around Mexico I only knew tacos, fajitas and nachos. But there is so much more to Mexican cuisine!

The cuisine of Mexico…

The cuisine of Mexico varies greatly from one region to another. On the east coast you see more of an African and Caribbean influence. To the west, Oaxaca is considered the culinary Mecca of Mexico and their cuisine is known to be a bit more daring, surprising, with an emphasis on seafood. They are also renowned for their numerous moles and giant empanadas. Up North you see more use of beef and flour tortillas inland but simple classics on the coast like ceviche. Pueblo is the home of the iconic mole poblano and a few varieties of stuffed chiles. Then Baja California, a thin peninsula hanging off the bottom of California is the home of what people often refer to as Cal-Mex cuisine. Lots of seafood, ceviches, lightly battered fish tacos, roasted cactus salad, and of course the home of margaritas and Caesar salads!

A few years ago I started teaching a Mexican Kitchen cooking class and these mushroom enchiladas are one of the dishes I teach my students to prepare. In Mexico the tortilla is similar to pasta in Italy. It is a cheap way of nourishing the family and a vessel for carrying the more expensive ingredients of meat, fish and vegetables. As in Italy, where the people grow up eating pasta at least once a day, in Mexico the tortilla is laid on the table in similar frequency. How you fold the tortilla and how you prepare it changes the dish.

How to use a tortilla…

This is one of my favourite enchilada recipes. It is a vegetarian enchilada but carnivores need not worry. This dish is so full of complex flavour you will not miss the meat. The earthiness of mushrooms is contrasted by the sweetness of onions and peppers. The smoky chiles add an amazing dimension of flavour which, alongside the fresh cilantro (coriander), cuts the richness of the cheese and cream. These mushroom and pepper enchiladas are delicious on their own but can also be served with a Salsa Pico de Gallo found here in this recipe for Sweet Potato & Blackbean Burgers. 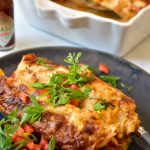 Smokey, earthy and sweet, these vegetarian enchiladas will become a new favourite!

About the Author: Jessica Verity

You have Successfully Subscribed!